Landscapes of Injustice Claim Series #11 The Journey of a Piece of Furniture, a Piece of Family History 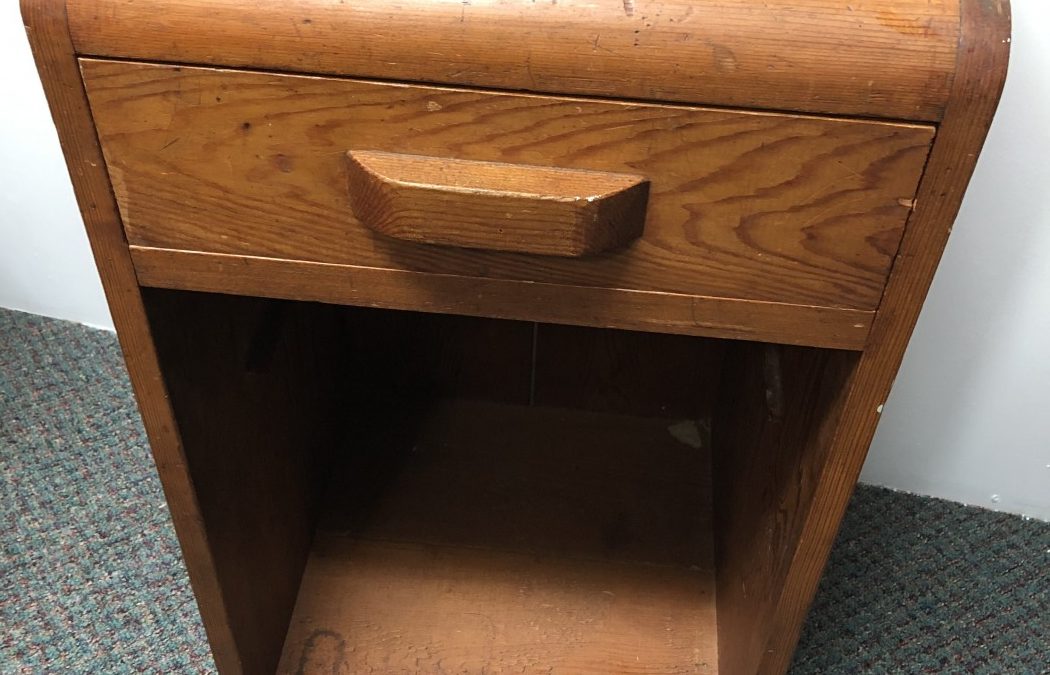 Listen to this story on CBC Radio North By Northwest with Sheryl MacKay December 12, 2020

In 1991, my Auntie Katy (Kaoru nee Toyota) and Uncle Kumy (Kumeo) Yoshida came from London Ontario with Kumy’s brother Shige (Shigeuki Edward) Yoshida’s family for the unveiling of the Lone Scout mural in Chemainus. The mural paid tribute to Shige’s history as a scout leader, starting in Chemainus and eventually building the largest Scout troop in the Commonwealth while interned in Tashme just outside Hope BC. Years later I heard a story that while they were there someone came up to them and said that they still have their family’s furniture that they took in for safekeeping until they returned after their forced removal. “We’ve been looking for you for 50 years” she said. When I asked my aunt for more details about what happened she said she couldn’t remember and so this family urban legend remained a mystery for another 30 years. Until recently.

My mother, Ruth was the 13th of 14 children to Shoshichi and Kiriye Toyota living in Paldi BC just outside Duncan before WWII. Her uncle and aunt Daigoro and Hanayo and their 10 children lived next door. The houses and furniture were built by some of her brothers, including Mus, George and Bob. 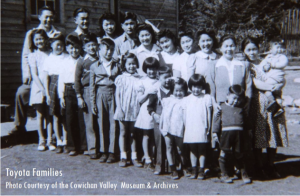 Paldi, known as Mayo at the time, was a bustling sawmill community, populated with Indo, Japanese and Chinese Canadians. Caucasians were the minority in this unique community of mixed races. (1)  My aunt remembers it fondly as a place where there was little racial discrimination despite a very racist BC at the time.

Sadly, not much remains of Paldi today and in 2015 my cousin and my family went looking for the exact location of the Toyota houses, eventually discovering not only the location but two plum trees that my grandmother used to make umeboshi, a pickled sour plum for the middle of rice balls. I wrote about that in an article, Paldi, The Town History Plum Forgot, after my mother visited in 2016 and there it has remained, on the Landscapes of Injustice website in the Touched by Dispossession section.

Fast forwarding to September 2020 imagine my surprise when I received an email from a visitor to the site.

Hello, my name is Judy Koga-Ross. Thank you for sharing your lovely story. I lived and grew up in Paldi and married into the Ross family from Duncan. Mary and Perry Ross held onto some dresser drawers for a Toyota family during the internment. They had promised the family it would be here upon their return but the Toyota family never came back to the Cowichan Valley to their knowledge. We have a corner table which Mike Ross, my husband, inherited when he left for university. The other piece of furniture may have been sold along with the house when Mary and Perry died. If you would like the end table, it is yours.
Respectfully Yours,
Judy Koga-Ross

Excited and in shock I wrote back and several emails were exchanged. I also found out more about Perry and Mary Ross in the book Paldi Remembered, written by Joan Mayo, long-time resident of Paldi.

In an interview with Perry Ross and his wife Mary Joan relates Perry saying, “It all happened so fast we didn’t really catch on to what was happening till suddenly they were all gone.” 2

Said his wife Mary, “I remember all those people coming from Duncan offering to buy their furniture, cars and other belongings real cheap. It was criminal. They took their hard-earned belongings for next to nothing. We bought a chesterfield from the Toyotas but we paid them a fair price. It was real sad to see them go like that.  3

Joan added that later the Ross family moved into one of the two large two-storey houses the Toyota brothers had built for themselves. The other one was lost in a fire. 4

The connection continued to grow and so did my anticipation of meeting Judy and Mike and as luck would have it my wife and I and eldest son were on our way to the mainland later that week so we started out a day earlier and fit in a trip to Mission BC.

We spent a wonderful afternoon sharing stories and history with Judy and Mike, who were the most gracious hosts and after some emotional goodbyes we took possession of a small but treasured piece of family history that survived the forced uprooting and dispersal of a family half a country away, almost 80 years before. We were assured by Mike and Judy that it had served them well and was well loved. The sturdy end table built by my Uncle Bob Toyota had weathered much use, and it was accompanied by index cards that said, Welcome Home! and “I have lived with Perry and Mary Ross since 1941 ish! I was a bedroom end table all my time away. J

Talking to my 95 year old Auntie Katy she said that it was likely Uncle Bob who made the end table as he made most of the furniture and also helped build the two Toyota houses. Bob passed away in 2018 at the age of 96.

I then emailed Rodney and Marsha, Bob’s children. Rodney said that working with his dad on many hotel furniture projects, that night table reminded him of many projects they did -and he used that style in a few hotels. He also remembers his dad telling him stories about how he’d stay up late at night making handmade furniture in their shed for the community.  He’d use scrap material from the mill where he worked full time since he was 13 years old. This experience led to a lifetime career in woodworking.

I pulled the case file for Uncle Bob and there is a line that says under personal property, 1 box of carpenter’s tools, 1 bicycle in their house at Paldi, BC, being looked after by P. Ross who is living in house.

Auntie Katy also related the story of Shige being whisked off to Victoria during his internment in Tashme to be congratulated in person by Lord Baden-Powell at a Jamboree being held there. Helen Lansdowne, Associate Director at CAPI upon hearing this story, noted the contradiction of the entire situation. The largest scout troop with its inherent colonial ideals, honoured while being incarcerated by their own country of birth.

And talking to Joan Mayo, she recalls the Ross’ and said that she has home movies of young Judy overtaking her son in a sack race at a picnic in the early 60’s.

I have a feeling that this story might continue. 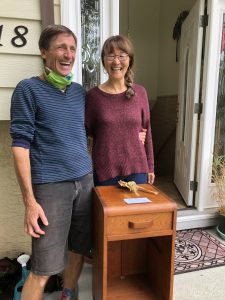 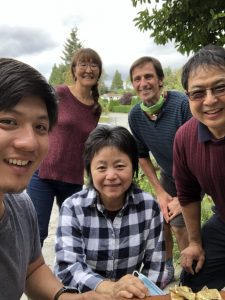 Listen to this story on CBC Radio North By Northwest with Sheryl MacKay December 12, 2020