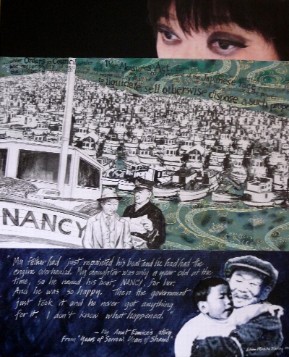 In 1996, I asked my mother Lillie Reiko Hamaguchi to write her story for her grandchildren.  Since then I have been dedicating my artwork to the telling of my family story of relocation. See www.blakeyart.ca
Following is Mom’s story:

Then at Christmas time, Roy came home unexpectedly.  We were thrilled to see him.  I had never thought that he would be sharing Christmas with us!  He said it was too cold to work in the mountains.  The temperature was down to -55 degrees Fahrenheit in the Rockies.  I don’t know how he made it home.  The mountain roads were treacherous, with barely enough space for a car to pass.  One slip and the car could go over the edge.  To make matters worse, there were no windshield wipers and he had to clear the ice by hand.  He could see the road only through a tiny hole in the ice.  There were also no heaters in those old cars and the men drank liquor to keep warm.  It was a miracle that they made it home alive.  It’s ironic, but the scariest moment for him was spinning on the tracks in Lethbridge.
It took ten very hard years to save enough money for the train fare for the four of us to move to Toronto to join Roy’s best friend, Ted Naruse, and his family.  Between the two of us, we earned only nine hundred dollars a year.  Even in those days, this was very little.  We were frugal and counted every penny, making underwear out of flour sacks, growing our own vegetables and canning our food for the winter.
Roy had to work in logging camps in B.C. to make ends meet, earning only twenty-five cents an hour for extremely dangerous and nerve-wracking feats.  His job was to climb up the huge Douglas Fir without a safety belt and cut the tops off.  When the top fell off, the tree would swing violently, back and forth, with Roy clinging on for dear life.  I’m glad I wasn’t there to see him.
Ever since that time, Roy disliked trees.  You can’t blame him.  It was part of his life he wanted to forget.  There was just too much hardship and loneliness.  When we eventually had our own property in Toronto, we had one tree in our backyard and he cut it down.
In December, 1980, Roy died of cancer of the oesophagus, which was probably caused by the work in the sawmills and the foundry.  His resting-place is at the Prospect Cemetery Mausoleum in Toronto. I felt he would prefer to be inside a building than to be outside.  For me, it is not easy, after all these years.  Not a day goes by that I do not think of him.
In 1988, the Canadian Government announced a redress settlement to survivors of the evacuation and their children.  The Government acknowledged that the forced removal was unjust.  It also recognized that, despite the great stress and hardship, we had all remained loyal to Canada.  The Canadian Government officially apologized for its treatment of us.
It is very sad that Roy, my parents and Rosie died before they knew that their country finally admitted that it had been wrong.  I hope that the Government of Canada will never treat any of its people with such horrific unfairness again.  I know that my family has paid an enormous price.  We were split apart so that my children grew up, never knowing their grandparents, aunts and cousins.  The Government can never compensate this loss.  I remember what Roy always said, that what happened in the past was over, that it could not be helped in those times, that we must not be bitter, that we had to look to the future.  Still, I will always remember the shock and fear I felt when I heard that news broadcast on December 7, 1941.  And I feel a deep sadness that we were punished for doing nothing wrong.