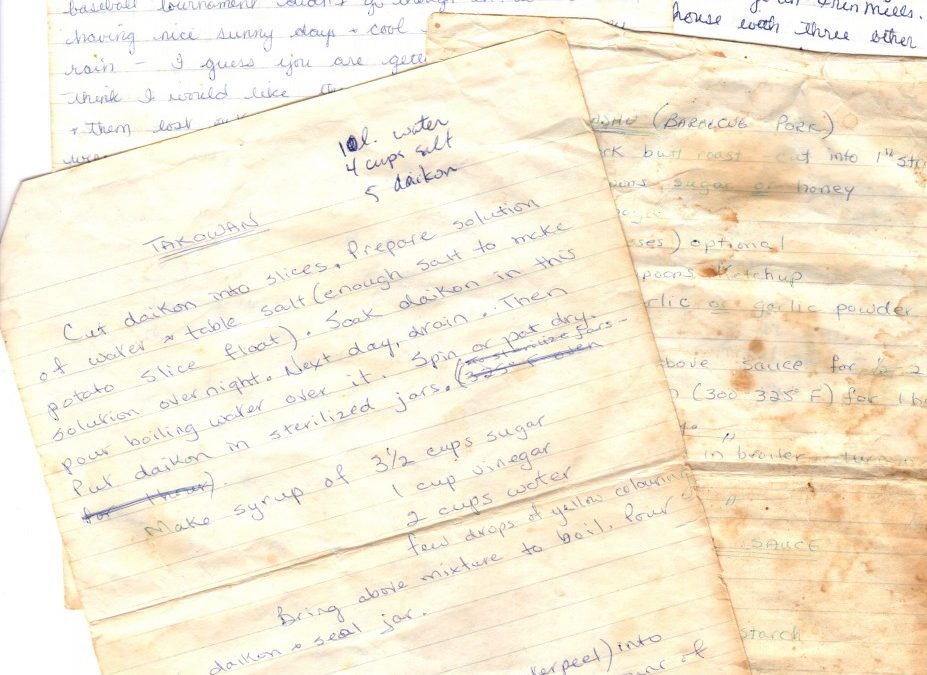 Here is an entry in the series on the four claims that is food-related.

The forced uprooting and dispossession of Japanese Canadians during the 1940s destroyed a community on the west coast, dispersing it across the country in subsequent years. Generations later, we try to piece together remnants of this home. One way, of course, is through food and their traditions.

I remember the first “Japanese English” riddle I ever made up back in my youth. Baachan rolled her eyes, some siblings and cousins giggled, others carried on in oblivion.

What happened when the octopus fought the squid? The tako won.

Ah, yes. The ubiquitous and formidable yellow and equally smelly, takuan. Bright yellow, crispy, crunchy, tasty morsels of pickled daikon, Japanese horseradish, dispensed rather surreptitiously from a jar passed around the table as people quickly lifted the lid, took their portions, replaced the lid and relayed to the next. The original social distancer. It has come a long way from the shiplap shacks of New Denver.

There are so many foods and smells that remind me of growing up Japanese Canadian in a dual world of nihonjin and hakujin. New Year’s was special with foods that Baachan Abe, mom, and aunts lovingly prepared and the dozen-picnic-table-long potluck of Japanese food at the annual Toyota picnic. It was also hybrid dishes that had made it into our regular meal circuit, Cumberland chow mein, chashu and sweet and sour chicken balls. Desserts like mochi manju and sembei are so much more appreciated now as our dear Nisei continue to depart. Luckily for some, they had recipes left behind or were taught how to make these cherished dishes.

When I was living in Japan, I remember going to the grocery store and was awed by the variety of takuan that was available and hurried home with my treasure. I was, however, met with disappointment. It was crunchy yes, but not crispy, it was salty but not sweet at all, and it really wasn’t all that smelly. After a while I wrote home, desperate for the recipe, to fill that need for something that reminded me of home.

A few years ago, I came across a letter from my mother, dated September 5, 1989, with 6 pages of updates on the family and their three young grandchildren and the aunts, the uncles, the cousins, and the Blue Jays, etc. And the last few pages were well worn, shoyu-stained pages with the recipes for Takowan (Takuan), Kimpira (fried gobo, burdock root) Karashi napa, Chashu (barbecued pork), Sweet & Sour Sauce and Sumono (sunomono, vinegared vegetables). These comfort foods would make up many a late night snack accompanied with a bowl of rice and ochatsuke and maybe some fried wieners.  Oh, and umeboshi, that I have previously written about. 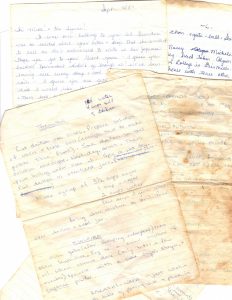 I showed the recipe for mom’s “Takowan” to my daughter, Natsuki and we laughed at the ingredients. Cut daikon into slices. Prepare solution of water & table salt (enough salt to make potato slice float)…. “How big is the potato slice, how much water?” she asked until her brother, Kento reminded us of the principles of buoyancy. In any case, I see my handwriting in the corner, 10 l. water, 4 cups salt, 5 daikon.

Such is the way of handing down recipes. A recipe for Udon from my Auntie Nancy several years ago revealed a ladleful of powdered dashi, a thumb sized piece of ginger… and cousin Michele, noted that when making black beans for New Year’s o-seichi, “rusty”nails were to be added to the water while simmering. (apparently the iron oxide reacts with the tannins to give it the dark black colour).

Reminiscing about Japanese food with others reveal other humorous and nostalgic stories. I recall a funny story from Lisa Uyeda and the role of takuan in her family.

“Takuan is a family favourite in our house and we usually call it daikon, yellow pickle, or stinky pickle. You can always find a good stash of it in the fridge. Back in my dating years, if I brought a potential suitor to the house they had to pass “the yellow pickle test.” I think my Dad started it as a joke but successfully eating a piece of takuan continued on whenever friends made it to the dinner table. It was also a good indicator for me to know if these potential suitors could appreciate my favourite pickle! Thank goodness my partner Kevin passed the test.”

And one final story that has stuck in my head since I first read it is a story from writer, Sally Ito, who in a series of short vignettes about her great Aunty Kay during the internment, shares a story about Japanese tsukemono (pickles).

In 1942, Japanese Canadians like my great aunt and grandmother were forcibly moved out of their homes into internment camps in interior B.C. My aunt and grandmother with her five boys were rounded up by the R.C.M.P. and taken to the temporary holding facility at Hastings Park in Vancouver before being shipped out by train to the Kootenays. They were allowed only a few items to take and these were stored in a central location at the park.

My great aunt and grandmother went to this storage location to make sure that the items they brought – namely their sewing machines – were safe. (There is a story about how these sewing machines were procured but that is for another time.) When they got there, my great aunt noticed a large stone with a family’s name tag attached to it.

“Who would have thought to bring that?”  My aunt wondered aloud.

“It’s their pickling stone,” my grandmother said. Pickles in Japan are made in vats with a disk of wood placed over the fermenting, salted vegetables pressed down with a large stone. Clearly, this family thought this stone was of such importance that they must bring it along with them wherever they would be going.

The sisters looked at the stone, then at one another and burst into laughter.

You can read other stories like this about Sally’s aunt at http://cowbird.com/grdvph/.  Sally has also published a memoir, The Emperor’s Orphans, where her Aunty Kay features as a narrating voice in the book.  https://www.turnstonepress.com/books/non-fiction/memoir/emperors-orphans-the.html