Landscapes of Injustice Claim Series #8 Without a Trace 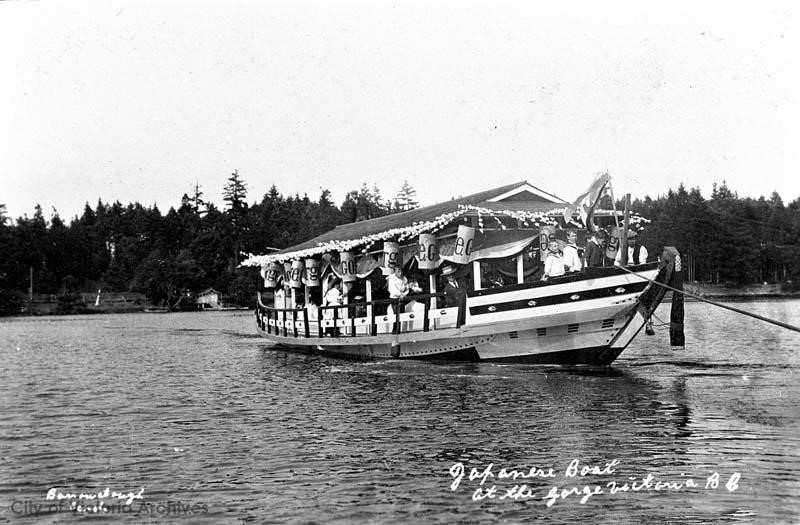 In our continuing series on the Four Claims, this story follows the provenance of a small but important piano.

With the invention of the incandescent light bulb in the 1880’s, came a boom in their production and use. Victoria was no exception, a modern city with many of the better off homes lit by electricity.

The boom of construction along the Gorge Waterway led to the expansion of streetcar along Gorge and Craigflower Road. The BC Electric Railway (BCER) bought 20 acres of land from the Hudson’s Bay and in a matter of months cleared 10 acres. On July 26, 1905, Tramway Gorge Park was opened to great fanfare, with entertainment and concessions heralding in the new industrial age, the Electrical Age. Tram riders who disembarked at the Loop at the end of the line were greeted with a giant sign reading Gorge Park outlined in electrical candles.

For a 5 cent fare, the regular summer tram service ran two cars, each with a capacity of 100 riders, every 20 minutes between the main juncture of Yates and Government and the Gorge Loop.   A huge canvas sheet showed outdoor movies, there was a merry go round, a dance pavilion with a fine sprung wooden floor, a roller coaster called the Scenic Railway and a water slide called Shoot the Chute.  In 1924 even a roller rink was added.

Circuses, vaudeville performances and side shows came and went. Boating, picnics, fireworks and a band stand all added to the park’s vibrancy. 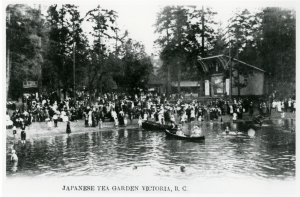 Inspired by the 1894 World Expo in San Francisco and the popular Japanese Tea Garden he approached Albert Goward the manager of Tramway Company and pitched him the idea of a Japanese tea garden to increase visitor draw.  Joe, Hayato (Harry) Takata and 4 other business partners raised $5,000 and were assigned 1 acre of land within the Tramway Park. They leased it for $50/year, later raised to $100 but within a few years they would recoup their original investment.

Joe Kishida sent for his father, Isaburo Kishida, a garden designer employed by the Yokohama Nursery in Japan. The 65 year old Isaburo arrived by ship on April 19, 1907. Before long, he imported plants and bonsai trees from Japan, designed Japanese-style bridges over winding streams, and installed stone lanterns.  Helping with falling the trees, planting shrubs and building the garden and ponds were Japanese sealers wintering in Victoria harbour.  On July 11, 1907 the Japanese Tea Garden opened, attended by 786 curious holidayers and by the weekend attendance grew to thousands. It was a resounding success. The gardens were beautiful, the location was stunning. And, critically, Kishida and Takata had a knack for anticipating Victorian’s sensibilities. Later Harry’s brother, Kensuke would join him in the venture.

The boat was berthed near the swimming area alongside a floating teahouse-waiting room where cherry blossoms and paper lanterns trimmed the eaves. Crossing a red lacquered bridge, one would board the vessel adorned with beaded curtains and tables for tea, ice cream and “kindred refreshments.”  Bamboo, imitation wisteria and banners bearing the Jenkichi Nishimoto name decorated the houseboat itself. 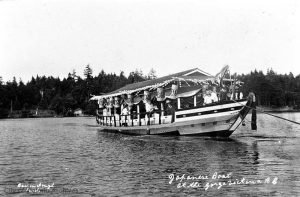 Jenkichi ran his successful business from 1909 to 1920. For 10 cents it would take visitors up the Gorge to Craigflower Bridge and back whilst enjoying the scenery, refreshments and entertainment from a small piano.

When Nishimoto closed his operation to focus on his boat building and farming, he moved the piano to his home in the nearby Tillicum area. In 1938 when he moved his family to Vancouver he gave the piano to the Takata family,

With federal orders to uproot Japanese Canadians in 1942 the Takatas were among the 273 men, women, and children herded on to a CPR steamship in Victoria Harbour on April 22, 1942, bound for Hastings Park. After five months in the detainment centre, with unsanitary conditions, the Takata family was interned in Sandon, a silver mining ghost town deep in the Kootenay area of British Columbia. After the war, the family resettled in Ontario.

Once the family had moved to Toronto, Kensuke’s daughter Toshie wrote to the government.  We get a glimpse of the inner turmoil in the urgent letters of the 18-year-old after efforts to preserve her piano from the process of dispossession failed.

“I would like to stress that the piano was sold owing to financial circumstances otherwise it would have been preferably shipped here despite the high freight expenses.” 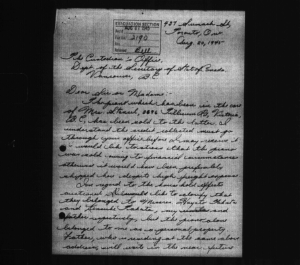 The Takata family reunited briefly in Toronto before Harry returned to Japan to take care of the family business. Kensuke’s family rebuilt their lives in Toronto. Kensuke became a master of bonsai and returned to his hometown for a visit in 1979 where he died at the venerable age of ninety five, in the same Japanese house where he was born.

One of his sons, Toyo Takata became a JC community historian and stayed in touch with many friends and classmates in Victoria. He wrote Nikkei Legacy and helped build a Takata Gardens at the Horticulture Centre of the Pacific. His grandson Dillon Takata is the great-grandson of Kensuke Takata and several years ago returned to Victoria where he is doctor. He and his wife Lisa Hansen got married in 2016 in those Gardens and they have been deeply involved in the teahouse campaign.

But what became of the piano?

Shortly after the initiative for the revitalization of the Japanese Tea House in Gorge Park began, the VNCS received this email.

“My name is Steven Lennon and I have lived in Victoria all my life (as did my parents and grandparents).  I read with interest the article in the Times Colonist on April 14th (2019) and believe that I have the piano that was at the Gardens during the War. As a child, I was told that the “caretakers” were friends with my grandparents, Ernest and Muriel Stancil. They sold it to my grandparents when the original owners at the Gardens were interned during the war.

Over time it came into my possession.  I have had it for 41 years while prior to this, my parents and grandparents had it in theirs.   I would like to donate to the Society if there is interest in having it.”

As we brainstorm ways to furnish the tea house structure with Japanese Canadian history and cultural elements, I think it would be incredibly powerful to repatriate this symbol of dispossession and resilience. I could imagine seeing the piano and its story in the foyer of the multi-purpose building to greet visitors and even if possible, refurbished for visitors to play.