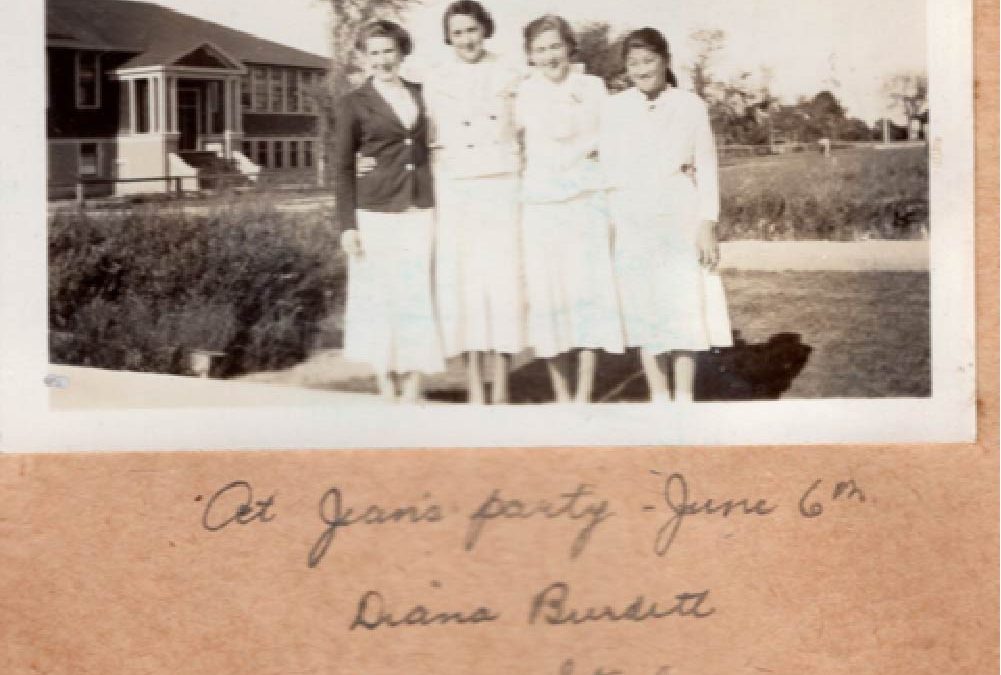 Heroism in the everyday:  Soul Friendship

Out of the blue a few weeks ago, a stranger from the States reached out to me after having read the Globe and Mail article I wrote about getting to know my grandfather through the declassified case files from the Landscapes of Injustice (My Grandfather found out how to get back a little of what he lost in the Internment).  It turns out that she was the daughter of my aunt’s best friend from childhood in Steveston, where they both grew up together in the ’20 & 30s.

She was writing a historic memoir about her mom, so wanted to connect with the Saimoto family.  My Auntie Nobby has been gone for about 30 years, and her mother is gone as well.  I recognized her mother’s maiden name as I had seen the name in one of the legal documents in my grandfather Kunimatsu’s file.  So this prompted my interest even more.  As I knew my aunt was sending a message from upstairs, I called the daughter the next day and a story began to unfold:  the extraordinary story of two soul sisters and how their friendship changed the course of her mother’s life.

My Auntie Nobby (Nobuko) was born in 1921 in Steveston, the eldest of 10 children.  She contracted TB during the war, and she spent a greater part of the Internment recovering at the New Denver Sanitorium for Japanese Canadian patients while her family lived in Minto, a self-supporting Internment site.  She did not have an easy life, as she always had health issues probably related to her TB.  She was very skilled with her hands; she taught me how to knit and crochet.  She was a kind, gentle soul, who never complained.

Through her daughter, Lisa, for the first time I saw photos and correspondence of my young aunt that her mom had saved all these years.  The extraordinary thing about their friendship was the backdrop in which it took place.  The gentleman’s agreement between Canada and Japan of 1908 started to limit the amount of emigration from Japan due to rising economic success of new immigrants and the heightening of anti-Asian sentiment.  Along this path, In the 1920s, the government intensified the restriction of fishermen licenses granted to Japanese Canadian fishermen, and imposed certain rules, like for example, not allowing to have a diesel engine on a Japanese Canadian fishing boat.  And of course, no Asian Canadian had the franchise until the Internment ended in 1949. 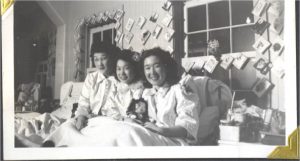 Yet in the thriving fishing hamlet of Steveston which had a population of about 8000 at the time, at age 4 (~1925), my aunt and Diana became friends.  My aunt’s first language was Japanese and didn’t speak English.  Diana Burdett didn’t speak Japanese. In spite of this, they became best friends.  Diana, my aunt and the family’s two dogs, used to hang out together.  I knew from our dad that one of the dog’s name was ‘Choppi’.  And I learned from Diana’s daughter that the second dog’s name was ‘Pete’.

Diana went to school with my aunt at Lord Byng Elementary in Steveston.  She was the only little white girl to sit in Japanese School class after pubic school to learn Japanese with my aunt. The building of the expansion of Lord Byng was an extraordinary story as well.  It was the only Japanese school before the war that was held in a public school as the Japanese Canadian community had come up with $20,000 to build it and had asked the provincial government to match the amount.  The condition of the joint funding was that the facilities could be used for Japanese School classes in off school hours.

So, from Monday to Friday Japanese School was held after public school finished.  Apparently, the Japanese teacher did not acknowledge Diana in class, but did not kick her out either.  My aunt and Diana would snack on onigiri, and Diana would regularly come over to play at the Saimoto family home.

By piecing together bits and pieces of stories, Diana’s father, Owen Burdett, had tried to help my grandfather keep the family home by leasing it from him during the war.  The attached file shows the leasee is Owen Burdett, who leased the Saimoto family home for $10 per month.  At first it was to prevent looting, and then to prevent the forced sale.  In the end, it was sold about 1946-47.  My uncle recalls Mr. Burdett visiting the family up in Revelstoke in 1947, where they had relocated after living in Minto.  He remembered Mr. Burdett’s sad and stoic face walking up to their house in Revelstoke and assumed he was giving my grandfather very bad news.  Though ultimately it was not successful, what an extraordinary act of friendship, courage and kindness to the Saimoto family. 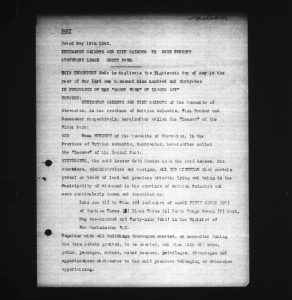 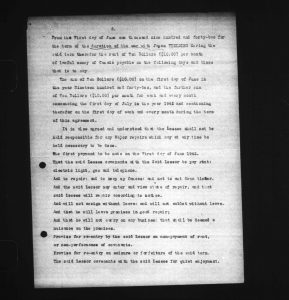 Even through the war years, my aunt and Diana continued to write letters and exchange photos, one of those being a photo of my aunt recuperating at the sanitorium.  It was heartwarming to know that my aunt did not feel alone at New Denver.  And despite the noise of war, Internment, racism, and post-war life, they remained friends during the war and until their deaths.  Two little girls learning each other’s languages and culture, seeing each other only as soul friends. 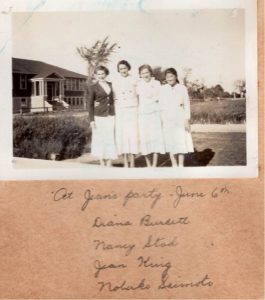 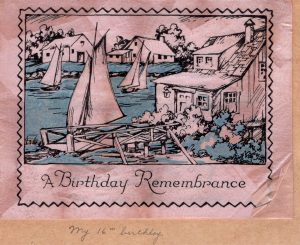 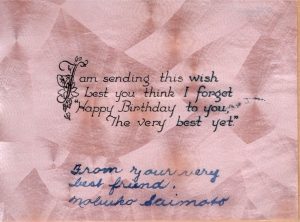 There are more twists and turns.  Because Diana had learned Japanese as a little girl, she eventually worked for the US Occupation Forces in Intelligence as a translator post-war in Tokyo.  So her daughter shared with me immediate post-war Japan photos which her mother took and I’m now helping her to translate the captions for these extraordinary photos of post-war Japan.

While in the movies, we expect heroism to be bold and flashy, and action-packed, with heroes and heroines wielding super human prowess to save the world.  In real life, heroism can be quiet acts of everyday courage, of love and generosity going upstream when the current is downstream.  In the increasing angst of racial tensions today, my aunt and Diana, came to remind us the heroism of ‘soul friendship’.