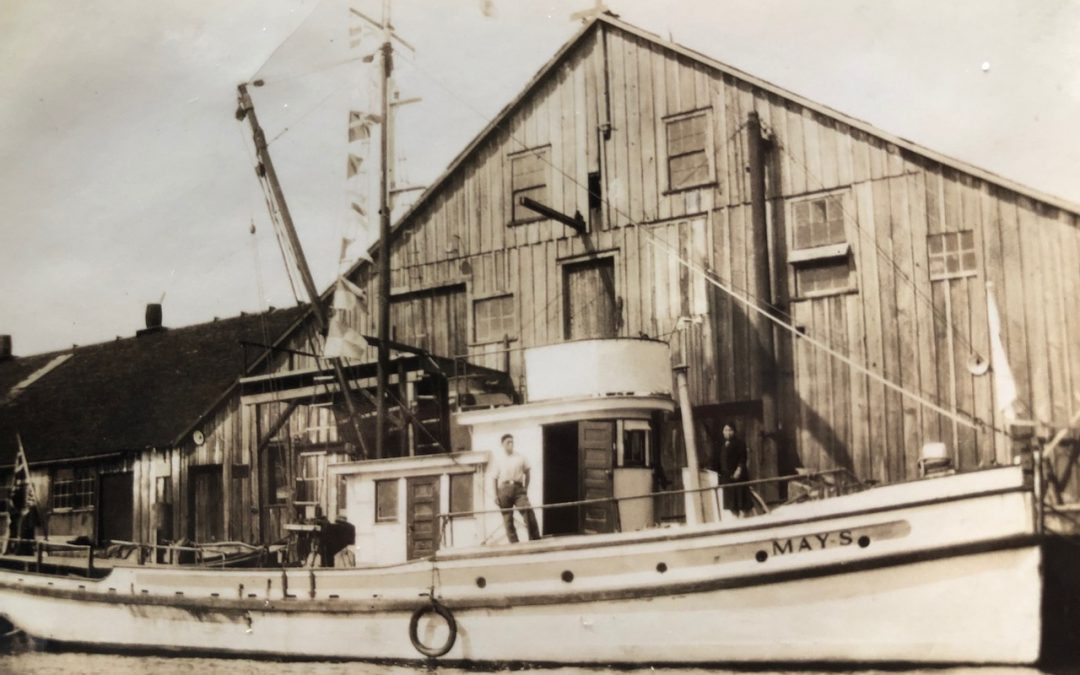 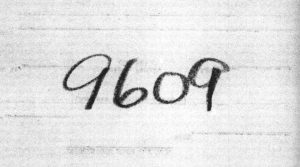 When I first opened my grandfather’s case file (about 500 pages) from the Office of the Custodian, there was a handwritten number:  9609.  What did this mean?  It dawned on me that 9609 was my grandfather’s Internee number, assigned by the Office of the Custodian, the government authority that organized and implemented the Internment and Dispossession of Japanese Canadians from 1942-49. Out of the 15,000 case files on every single Japanese Canadian adult who was interned, grandfather Kunimatsu Saimoto was 9609.

I had heard stories about my grandfather, but had never met him.  Both he and my grandmother died before I was born.  I had seen family photos of his 4 seiner boats, of the family, of his house and car in Steveston before the war.  Like every granddaughter, I wanted to know more about who my grandfather was. 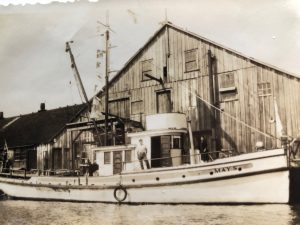 Then I thought, what could these government documents tell me? As I read every page, tears began streaming down my face.  Like any government authority that aims to systematically erase a people while telling themselves they were doing nothing wrong, they took meticulous, detailed records to an astonishing degree.  The Internment and Dispossession of Japanese Canadians was a machine of organization and administration, and everything was documented.

As I continued to read, I started to read into the mountains of legal, financial and administrative details – the measurements of his boats, the age of the new diesel engine he had bought just prior to the war, how many lots the family house in Steveston sat on; the number of bedrooms, etc. Gradually, as I connected the dots, a clear picture started to emerge about who my grandfather was as a person.

What I knew from my family was that Kunimatsu was born in 1890 in a tiny poor fishing village in Wakayama prefecture.  His older brother, who was a torpedo gunner in the Japanese navy, advised him to immigrate to Canada at age 16 in 1907 to avoid conscription and to build a fortune in the land of opportunity.  With a grade 6 education and not knowing a word of English, he settled in Steveston and became a fish buyer, owning 4 seiner boats, and having 200 fishermen under contract working for him.  As a fish buyer, he bought and consolidated individual fishermen catch to sell by volume contract to the canneries.  He married my grandmother and had 10 children. They lived in a detached house in Steveston and he drove a new 1939 Dodge. He sponsored many friends from his hometown to immigrate to Canada. He had guts, he was business savvy; he was honourable, and he was a family man.

As I continued to read, what emerged was that Kunimatsu was an activist.  Not in the modern sense, holding up placards chanting anti-this or “Occupy Powell Street”.  He did not riot in the streets, loot stores, nor burn down police stations, although I’m sure he felt the same kind of anger at the injustices being perpetrated.  As a new Canadian, he thoroughly learned and adapted to Canadian power structures and institutional systems rooted in democracy.  He was street smart, stood up for what he believed in, and had a strong and embodied sense of his own value and the value of what he had built.  For him, this was manifested in the incredible detail and deep knowledge he had on how the Canadian ‘system’ worked.  He used the system to peacefully stand up for himself, for what he believed was fair, for what he believed was just.  Bottom-line, he did not become a victim to injustice.  By using the system within the system, he valiantly challenged it.

Kunimatsu took meticulous business records of his assets.  He knew the power of information and its documentation, not just costs and revenues, but insurance for replacement costs, valuations, appraisals, landlord tenant arrangements with notarized lease agreements, depreciation etc..  He understood what Canadian business, financial and legal structures were built on.  He understood what citizenship was built upon.

In 1948, he and other Japanese Canadians, sued the Canadian Government in what was called the Bird Commission.  These are extraordinary records of Japanese Canadian activism, of my grandfather’s activism.  They did not directly challenge the government for the confiscation of their properties and forced sale of their assets in and of itself.  The claimants challenged the devaluation of their assets and the low compensation received for them. For my grandfather, this was their house in Steveston, his 4 boats, his car and his biggest asset was his largest boat, the May S. 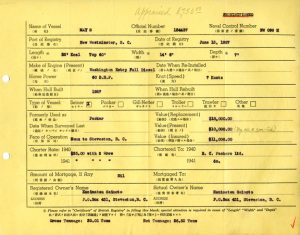 A 60′ long seiner, the May S was confiscated by the Canadian navy on Feb. 15, 1942. The navy used it to round up smaller Japanese Canadian fishing boats for the “Japanese Fishing Vessels Disposal Committee” The construction cost (see attached document) tallied up to a total of $16,825.80.  The replacement value according to his insurance was $18,000.  The insured value was $11,000.  Present value, according to the Canadian navy that took it over was $10,500.  The government appraised value in 1942 was $8750.  He received compensation of $8057.50.

In the end, the Commission conceded that their valuation had been undervalued by 10% of the actual value. It was not so much the percentage that was important.  These Japanese Canadians, knowing their value and the value of their assets and standing up for them, affirmed their own value, whatever the outcome.  He did not become a victim to his victimizers, though the attempt was administratively vicious. Though heartbreaking and I’m sure, oh so tempting, he did not give up.  His dignity shone through the details on the page by using the rules of his victimizers to expose their moral bankruptcy.

Kunimatsu chose to follow a path of activism, not through destruction, but by living the solid principles of citizenship, community leadership, building and living by the values of humanity, justice and entrepreneurship.  Case file 9609.  That’s Kunimatsu Saimoto, my grandfather.