Letters of What Was Lost Family stories series #18 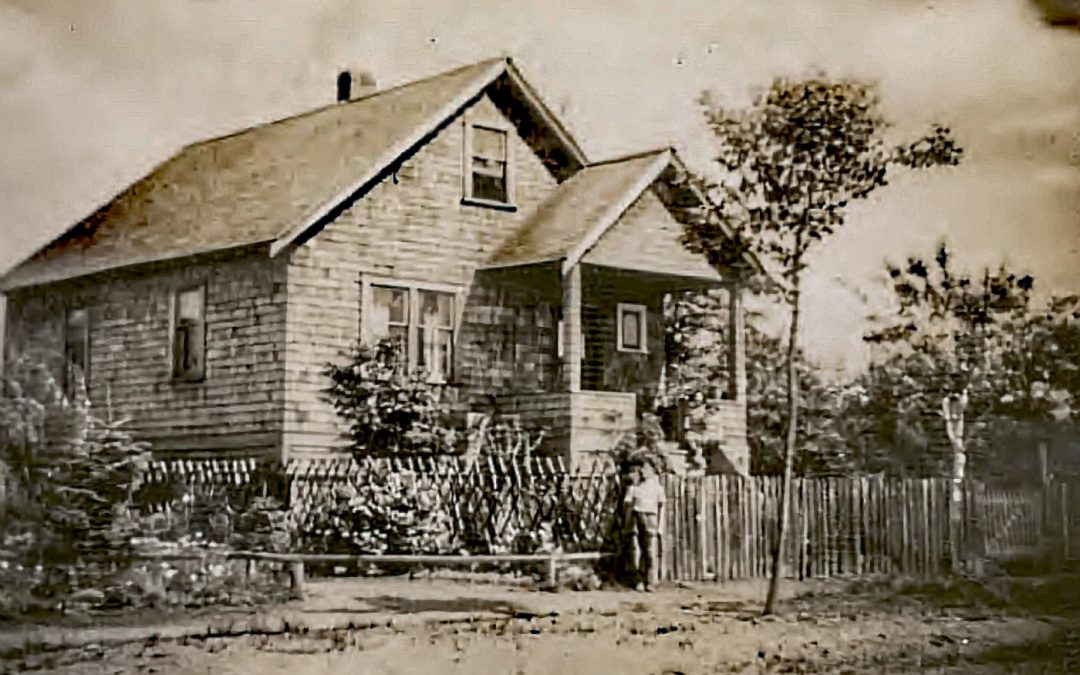 My grandfather, Fusakichi Fujimagari was 58 years old in 1942. From the digital archives case file, I learned that his property at 204 Alpha Avenue was one acre with a newly built two story home (with ofuro in the basement and a flush toilet!) a chicken house, brooder house, thousands of flowers, many fruit trees and a large vegetable garden. 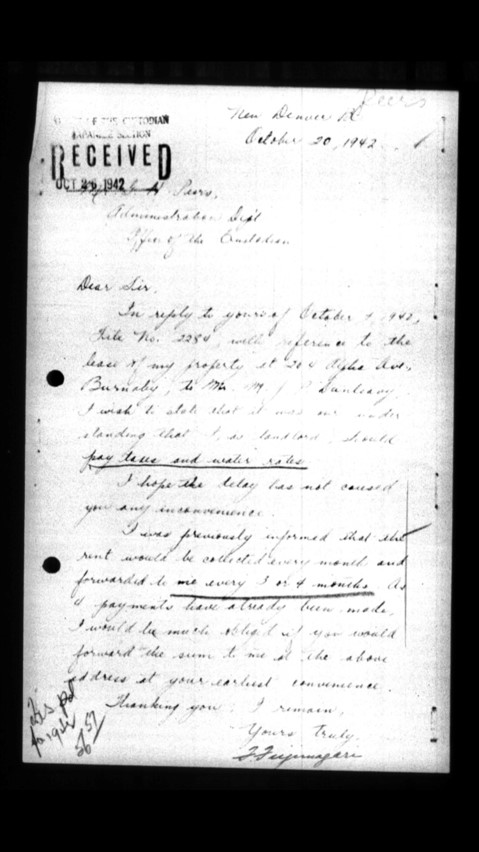 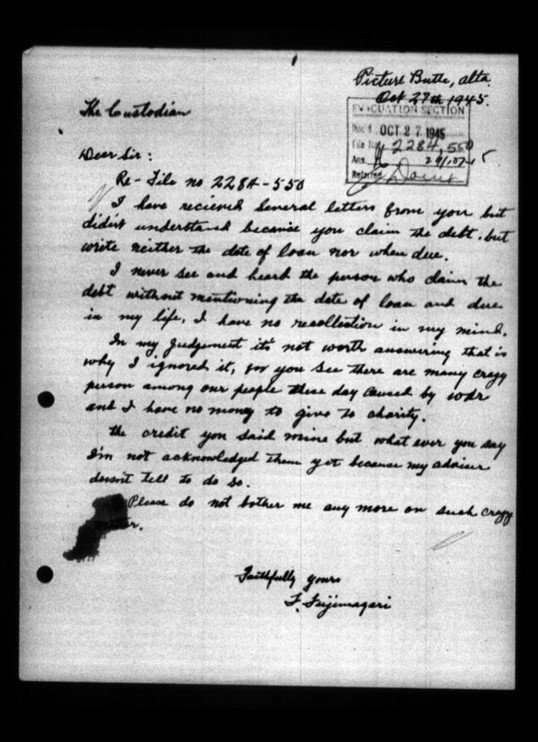 I found a handwritten letter from my grandfather telling the Custodian he had rented the property to a tenant for $10/month starting May 29th, 1942 and now in October he is expecting 4 months rent.
“...I would be much obliged if you would forward the sum to me at the address above at your earliest convenience”. October 20 1942 New Denver.

The case files show that taxes were $60/year plus water bills which were paid by Fujimagari.  Other hand written letters are from Picture Butte 1945 and Taber 1949.  From the files, starting in March 1943, offers to purchase the property were submitted ranging from $475-$2100.

Using these handwritten letters as a reference with dates and locations of where the family lived, my 95 year old mom shared her experiences:

“My dad and 18 year old brother Jack had already been sent to work in a Road Camp in Griffin Lake BC with other JC men when we got the order to report to Hastings Park on May 28, 1942.  We walked there from our house which was next to Confederation Park.  In Hastings Park, we were given a metal bunk bed for the four of us girls and were told to stuff our mattress with straw.  We were in the livestock building section U.  I slept in the top bunk with Anne and Jean slept in the bottom bunk with Maggie. We hung sheets around our bed for privacy. My brothers, Tak and Yosh (12 and 14 years old) had to sleep in the boys’ building.  We ate in a separate building and there was a laundry building. I remember Mrs. Fukumoto who lived in a different section often looked out for us as we had to pass her every day.

We were sent by train to New Denver in September.  When we got to New Denver, they weren’t ready for us.  We had to sleep in tents.  It was so cold.  My father had building experience, (he had just finished building our house) so he and Jack were sent from the road camp to New Denver to build the shacks.  Our family was happy to be together in one shack.

In 1943, we applied to work on the sugar beet farms of Alberta.  We were one of the first families to leave New Denver.  I remember standing on the platform when the train stopped at Iron Springs.  All the local sugar beet farmers were there looking over the families. They wanted strong boys to work their fields. We stayed in a granary on the Beeswanger farm (a German family) for one season and then moved to another farm in Picture Butte before we moved to Taber.”

The case files document our family at John Pinter’s farm, Picture Butte in 1945 and the Fekete Farm, Taber where they stayed until the early-1950’s when they moved into a house in the town of Taber.

I am happy that my mother remembers events and places with so much detail and was able to connect the dots on some of the discoveries we encountered in the files.  When I asked my 17 year old daughter Naomi about her thoughts on hearing Baachan’s stories, she said, “I like hearing the family history because I didn’t learn anything about this in school.  I also think it is very special to hear it directly from my Baachan.”

It was in Taber where my mother married my father, George Hirasawa on September 10, 1955.

Photos courtesy of the Hirasawa family

In April 1942 (right before harvest), the Hirasawa Family was relocated from their 20 acre farm in Surrey BC to a sugar beet farm in Welling, Alberta near Raymond.  My Uncle Goro has done extensive research into our family history and in 2002, self-published a book “Hirasawa Family in Canada”. Takejiro Hirasawa was a very literate, hard-working man who was meticulous in his record keeping. After reading through the 209 page case file on Takejiro Hirasawa, I realized that he really fought for his property by writing numerous typed letters to the Custodian and Security Commission. There is a misconception that the Issei just let these events happen to them and just said  “shikata ga nai” (there is nothing that can be done).  In his numerous letters, Takejiro keeps asking for his belongings to be shipped to him in Alberta. There is a detailed list of items that he asks for including his Japanese books, 2 wooden boxes, farm tools and his farm scale.  A report from May 26, 1943 states that Mr. Bardwell threw out 4 sacks of strawberry plants, 2 wooden boxes plus mattresses, wooden beds, a large amount of books and magazines out the window and instructed the tenant to burn them.  I could hear the racism in the written replies to his letters. On June 15, 1944, the Credit Manager William Page wrote to the Custodian: “…we have just about got to the end of ourselves and feel like taking action against him.  You can convey this to him as we do not intend to cater to him anymore.  He has caused us more trouble than all the other Japanese put together.  I do not see why we should comply with all the requests he sends us.”

In a handwritten letter of March 15, 1943, Takejiro talks about an accident where my father was run over by a horse wagon.  He asks the Custodian to please pay the $95 hospital and doctor’s bill from his account.  He explains that he asked the owner of the farm and the person who my father was working for at the time to help with the medical costs without success.  He also explains how my father is now not able to help with the sugar beets and my Auntie Mary has to look after him and therefore, she cannot help with the sugar beets either.  This accident has caused a lot of anxiety, stress and worry for my grandfather. The Custodian writes back to say that there is not enough money in his account.  Takejiro then asks if they can please sell his incubators for him but case files note that the incubators were sold at auction with the rest of his equipment. It is during this time of letter exchanges that both Hirasawa properties are listed for sale by the Custodian.

I feel so much respect for Takejiro Hirasawa. His letters are respectful and written with great integrity in his second language-English. I am still learning new things about his losses, the injustice and how hard he worked throughout his life.

Thank you to Uncle Goro Hirasawa for compiling the family story so many years ago and for keeping the story alive.  Thank you to Landscapes of Injustice and NAJC for allowing me to share my family stories at the Powell Street On-line Event 2021.https://www.youtube.com/watch?v=DH6JDICWEKg