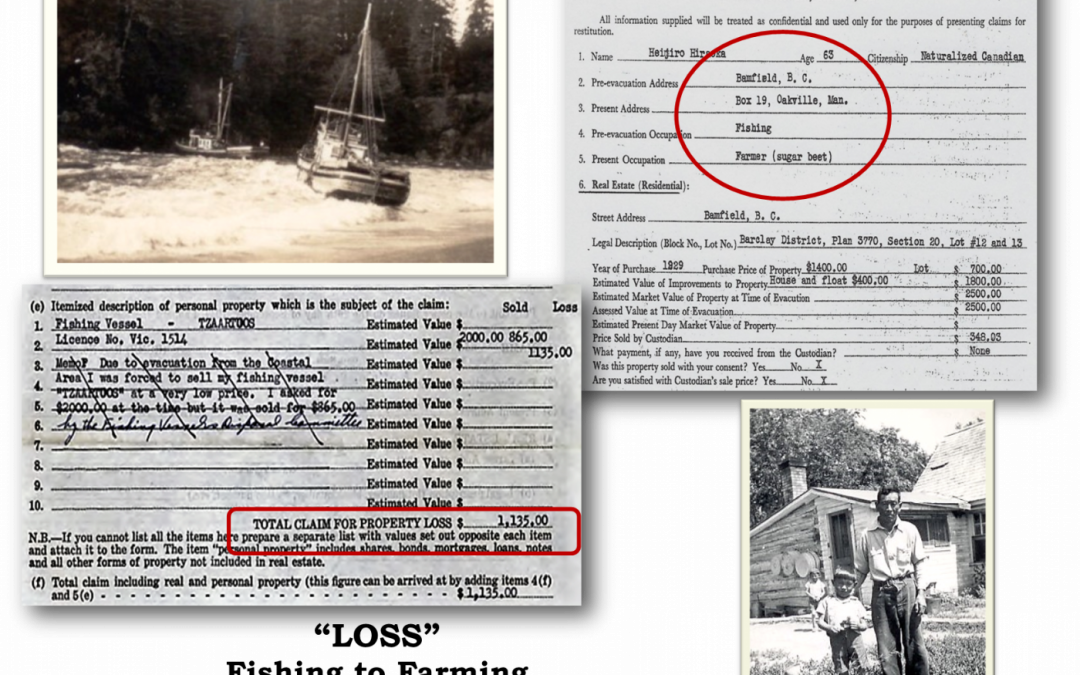 I never knew my paternal Issei grandfather – Heijiro Hiraoka was born December 1, 1883 in Oshima-gun, Yamaguchi-ken, Japan. He passed away on December 5, 1953 in Winnipeg, Manitoba. The only original document source I had was a 1914 Dominion of Canada “Certificate of Naturalization”. The year of his immigration to Canada appears to be 1899. He lived in New Westminster, Vancouver, San Mateo Bay, Cumberland (No. 1, Jap Town) and finally settling in Bamfield prior to evacuation. Pre-uprooting occupations included shingle mill (sawyer), fisherman, coal mining and whaling station. Eventually, father and son, Masao, became self-employed with a trawler named Tzaartoos. Heijiro and his wife Kise had 4 children from 1914 to 1924.

With the release of the Landscapes of Injustice database we have uncovered over 400 pages of documentation related to our family…beginning with two unexpected rare photographs which were part of “The Bird Commission” (The Royal Commission on Japanese Claims) court proceeding transcripts. Winnipeg Lawyer, The Honourable Saul Cherniak was their voice… 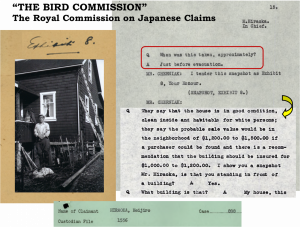 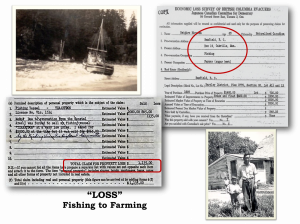 After they were transitioned from the West Coast, we have a new timeline to research.  Discovering that they moved 7-times (Powell Street rooming house, Hastings Park, Sandon, Rosebery, Tashme, Tully’s sugar beet farm in Manitoba and finally Winnipeg).  This did not include my father’s road camp assignment at the “Revelstoke-Sicamous Highway Project” and building gang in New Denver experiences. My mother’s term for evacuation was “Kicked-Out!” She was born and raised in Steveston and gave birth to two children in Sandon.

“Analysis of Personal Property Claim” – Interpretation of value??…Heijiro and his son disagreed with the appraisal of property and possessions of their livelihood. They repeatedly inquired about “no trace of” items throughout the internment. Imagine, corresponding with the Department of National Defense, Department of Labour, Secretary of State, Property Claims Commission, Pacific Command Canadian Royal Navy, Office of the Custodian – Japanese Section, Japanese Fishing Vessels Disposal Committee and other various organizations.

Also, by searching other Japanese names in their fishing inlet community, I was able to find a map indexing who their neighbours were.

I’m Pat Harumi Jetté, born in Winnipeg and now live in Calgary. I have been researching my JC and Japan heritage for a while. I have seen the original “Fishing Ledger” at the Nikkei Museum in Burnaby. The staff has assisted me with Koseki (Family Tree) charts and Library & Archives Canada collections ordering. I have followed the LOI journey since the beginning and never expected this overwhelming wealth of information.  Our gratitude to all involved!