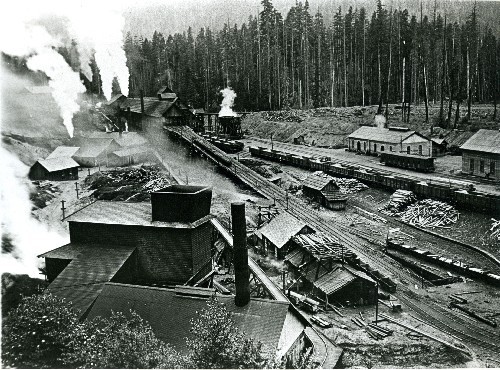 Submitted by Everette Surgenor, Castlegar, BC I believe that Mr. Kagetsu started his logging operation in Fanny Bay in 1923 and his timber license gave him access to timber from the highway up into the mountains between Coal Creek and north to Cougar Smith Creek. He shared a highway railway crossing and dump with Chemainus Logging, just south of the Fanny Bay Inn. My Grandfather Bill Surgenor ran locomotive for Mr. Kagetsu from 1932 to 1942. My Grandparents and their family lived in the camp. I believe that they were the only non-Japanese to do so. They became friends with the Kagetsu’s and would visit them at their home in Horseshoe Bay. There were approximately 100 people in the camp but it differed in substantial ways from other logging camps of the day. Instead of bunkhouses, each logger had his own house made of boards with shake roofs. Wives and children lived in the camp and they had gardens and flower beds. My Mom, who taught pre-school children in the camp to prepare them for attending the Fanny Bay school, said that the beds were made of wood and had wooden pillows. She also said that each house was equipped with a 3 by 4 foot outdoor tub with a metal bottom. The women would build a fire under the tub and heat the water so that the husband could have a bath when he returned from work each day. When 1942 arrived, Mr. Kagetsu lost Deep Bay Logging and his house in Horseshoe Bay overlooking where the ferries dock, as well as other possessions. My Dad believes that a Mr. Fletcher bought all of Deep Bay Logging from the Government, including the timber license, three steam and one gas donkey, 8 or 9 miles of track, extra steel, 15 out of 16 skeleton cars, a speeder, and a locomotive for $15,000. Fletcher went on to have his own logging show in Fanny Bay. I was told that Art Irizawa ( Fuji on the Super Dave Osborne Show ) was born and raised in this camp during the late 30/early 40’s. Photo credit: Kagetsu Saw Mill Courtesy of Japanese Canadian Cultural Centre Archives Accession number “2001.06.55”