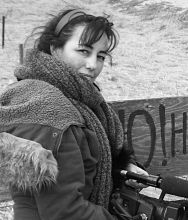 Susanne Tabata is a digital media producer whose passion is to elevate west coast stories into the arts. Susanne was born in Nanaimo, and lived in Tokyo and Victoria before moving to Vancouver in 1978 to study International Relations at UBC. Tabata’s father is a Japanese Canadian whose internment experience during and after WWII has impacted Susanne’s choices of projects. In 2012 she produced the centerpiece tribute video Welcome Home: UBC Japanese Canadian Students of 1942 for a special ceremony dedicated to students whose studies were interrupted during World War II. Tabata also designed, wrote, produced and directed the 10-part ethnography series for the Japanese Canadian National Museum called Ohanashi: Stories of Our Elders – a detailed examination of the experiences of Japanese Canadians who were interned during World War II – a story familiar to her father whose experiences are shared in the series. Susanne has a background as an instructional designer, and has conducted over 300 interviews, which advance the discussion of social justice. She teaches film studies part-time at the Art Institute of Vancouver and is on the Board of Directors of the Greater Vancouver Japanese Canadian Citizens’ Association.