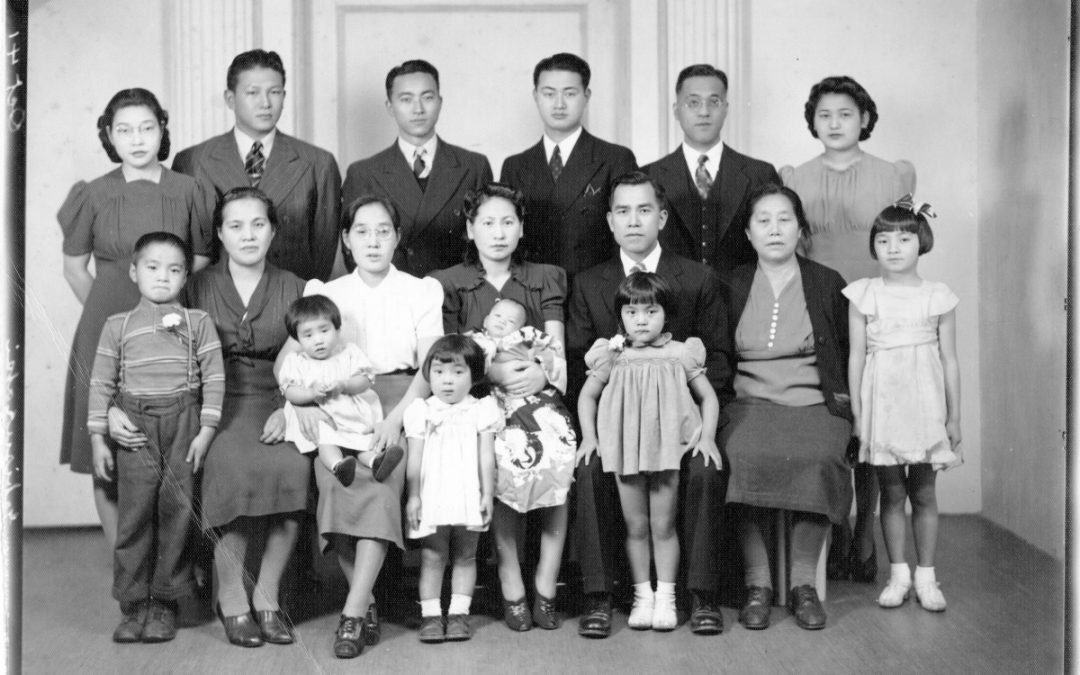 A family photo of the Ebisuzaki and Morishita families and workers of their store, early 1942, from Nancy Morishita’s private collections.

Part 6 of the series, Community Records and the Human Experiences of the Uprooting of Japanese Canadians, by Eiji Okawa and Landscapes of Injustice Research Collective (eiji.okawa@gmail.com)

The Onus of Officialdom

As we see, Kentaro’s family was starting to settle in Toronto, and they kept close ties with the Morishitas who had just sent them a parcel of Christmas presents. But the main concern at the time was the loan. That was what the Custodian letter was about. It was an urgent matter. Evidently, Kentaro even felt that if they didn’t respond to the Custodian’s queries property, they may get in trouble with the law and end up in jail.

Navigating the Entangled Process of Dispossession

There are several factors to consider here. The first is the financial standing of the store, after it was seized and closed down. As mentioned already, it had outstanding debts. The second is Teiji’s personal account which was created when his home on Cordova Street was sold by the government. That account was controlled by the Custodian, too. And third, there was the Royal Commission (“Claims Commission”) that was set up by the government in attempt to allay demands of Japanese Canadians for compensations for their losses. All of these were related. The following letter from a Vancouver law firm called Campbell, Brazier, Fisher & McMaster helps to understand what was happening with the store’s account. Written on May 11, 1949, the letter addressed Teiji.

You are probably aware that a proposed settlement of claims for property losses is now under consideration.

In view of the fact that M. Ebisuzaki Co., has remaining unpaid liabilities consisting of accounts payable in the amount of $4499.46 and it would not appear that an award in excess of $3500.00 to $4000.00 would be made, we feel that unless the creditors are willing to enter into an arrangement with you as to apportioning such an award if and when made, it would be a useless effort to press the claim.

We would like to have instructions whether or not you wish us to attempt an arrangement with the said creditors. It might be pointed out that of the $4499.46 owing creditors, something over $3,000.00 is owing Japanese creditors. We feel certain that these creditors would be interested in an arrangement whereby they might split the award 50-50 with you. We have no doubt that the other creditors would also be interested in receiving another dividend no matter how small.

Please let us hear from you by return mail.

Unfortunately the plan didn’t go well. On November 29, the lawyers wrote to Teiji:

…we are not meeting with a great deal of success with respect to obtaining the consent of creditors to the proposed method of distribution of any monies recovered upon an award by the Commissioner.

Most of the larger occidental creditors [meaning “white”] have agreed but we are having difficulty getting agreement from a number of the Japanese creditors. Furthermore, upon going into the matter further with Mr. Shears concerning the two or three large creditors who have returned to Japan, we find that they returned “voluntarily” and accordingly, the Custodian while he has control of their assets, has not power to compromise a debt on their behalf. Therefore, it would be necessary to obtain consent from these creditors as well.

It is disappointing because we think there is a reasonable possibility of recovering $1500 to $2000 from the Commission. One thing that crosses our mind is this: we understand that P.S. Ross & Sons have suggested to the Custodian that they should press you personally as one of the partners of the Company for payment of the balance of the debt. If an award were recovered and even the full amount is applied on the satisfaction of these debts, it would at least reduce your liability for them. You appreciate that in Canada each partner is liable for all of the debts of a partnership….[iv]

The creditors were far from generous. But the alarming part of the letter was the idea that the creditors were entitled to recover their money from Teiji’s personal money. This was a suggestion made by Ross & Sons, which must have been a law firm that was hired to advise the Custodian office. Canadian law made partners of a business liable for the debt of the business, and Teiji’s formal status was a partner.

Accordingly, the Custodian was about to give all the money from the Commission directly to the creditors without a single cent to Teiji. But that would not be enough to settle the store’s debt so Teiji would remain indebted, personally. And the Custodian had the legal grounds to transfer the remaining funds in Teiji’s account to the creditors.

Again, this problem would never have arisen had the store been running as usual, or had they been able to collect the store’s outstanding accounts receivables. Seen this way, it was a bizarre unintended consequences of the closure of the store. And it pressed Teiji and his family very hard into a tight corner.

Teiji had little recourse. Everything was being decided by bureaucrats in consultation with their lawyers. No doubt the officials were aware of the fact that the project of dispossession put them in the uncharted waters of administrative practice, so they needed the advice of legal experts to secure their footings. For Teiji and Kentaro, the $1000 loan was a means to protect the family’s asset from creditors and the government. If Teiji owed Kentaro money, then wouldn’t the settlement of that debt take precedence over the interests of the creditors who, after all, were seeking to collect from the store? The distinction here is between the store’s account and Teiji’s personal one, and the logic was that claims over a personal account should be recognized by the government if it were to recognize the claims over a business account.

But of course, to legitimize the personal loan, Teiji and Kentaro had to work together and present their loan in the terms that was recognizable by the government. And that was not so easy. For one thing, Teiji and Kentaro were now living in different places and had to correspond by mails. But second, the straitjacket of the government demanded certain protocols for the debt to be deemed real. Therefore, it rejected their initial claim of the debt. To that effect, F. G. Shears of the Custodian sent Teiji the following letter, dated August 31, 1950.

We are holding $1124.49 to the credit of your account. We have a further request from the Liquidator of Ebisuzaki & Company to pay this amount to him in order to contribute to the deficiency of funds required to pay creditors of the partnership.

We are aware that you claim to have borrowed $1000.00 from your nephew, Kentaro Ebisuzaki and that this amount should be paid to him rather than being applied to payment of partnership debts.

We have pointed out to Mr. Kentaro Ebisuzaki that it was evident that the note which he sent us purporting to support this loan, while being dated Sept. 15, 1936, had only recently been typed in English, the original note written in Japanese had been destroyed. It is difficult to understand why, after keeping a note for over twelve years, it was destroyed just at the time when its evidence would have been of value.

If this is done and you are prepared to swear to these affidavits in a legal manner, we will then submit the documents to out [sic] solicitor for his opinion as to whether the $1000.00 should be paid to Mr. Kentary [sic] Ebisuzaki or to the Liquidator of the partnership.

As we see here, Shears refused to recognize the loan unless both Teiji and Kentaro submitted affidavits to formalize it. But Shears didn’t promise anything. All he said was that if the protocols were followed, then he would consult the lawyers (“our solicitor”), perhaps Ross & Sons, to determine if the money could be remitted to Kentaro instead of the creditors.

Teiji went to a see a commissioner in Slocan City on September 6, 1950 to produce a Statutory Declaration to validate the loan.[vi] Then he sent it to the Custodian, together with a letter that said:

Thank you for your letter of August 31st. I particularly wish the $1000.00 to be paid to my nephew, Kentaro Ebisuzaki, as I borrowed the money from him years ago, and the balance $124.49 I would like, if possible sent direct to me….[vii]

The Significance of the Loan

What came out of Teiji and Kentaro’s efforts is not entirely clear. But it is not difficult to detect the ambivalence with which Teiji and Kentaro interacted with the Custodian, vice versa. Shears and officials in Ottawa questioned the authenticity of the loan itself. And it might seem plausible to ask if Teiji had actually borrowed the money from Kentaro. However, I would say that by doing so we would be overlooking the nature of the evisceration caused by the dispossession.

It is beside the point whether or not Teiji actually borrowed the money. The store was a family business sustained through a concerted effort of both the Morishita and Ebisuzaki families. And their home on Cordova Street was shared by them all. They all lived under a single roof. Legally, the ownership of the store may have been held jointly by the founder, Masataro and Hide Ebisuzaki and Teiji (who were “partners”), while the home was under Teiji’s sole title. But that was a matter of formality that says nothing about the family relations and practices that enabled them to lead the socioeconomic life that they did. The two families formed a coherent unit, and each persons did her or his part to make that unit work. But as a family, the roles that each played were not necessarily monetized let alone legally defined. The hard work that family members put into the store for years and decades was not intended to yield immediate returns but long-term results, and the ultimate aim of the family enterprise was the well-being of its members and their pursuit of life in Canada.

But as the government churned the store in its machinery of dispossession, it needed to institutionalize the various relations and positions that structured the business in terms that it could recognize. The informal roles of family members had little or no place in the government register, and the state exercised its prerogative to determine who among the diverse stakeholders of the store were entitled to pursue their interests. Hence it backed the creditors who mercilessly went after Teiji’s and the family’s asset while it invalidated their accounts receivables. The loan represents the family’s struggle to shield themselves from the crushing force that sought to deprive them of what was remaining of the wealth they had so painstakingly generated before the war.

Indeed, the experiences of dispossession were complex. It is ironic that state power infiltrated into the matrix of social relations that shaped Japanese Canadian lives just when those lives were being destroyed by the state. As Teiji and Kentaro felt compelled to present themselves as a “creditor” and “debtor” to negotiate with the authorities, they risked breaking the law to the point that the thought of being put in prison crossed their mind. Let us be absolutely clear: they were not offenders but perennial victims of the crooked state. Revealed herein is the enigma of the state as the bastion of power that monopolized legitimacy and legislative authority. What is frightening about the dispossession of Japanese Canadians is not simply that it occurred but that it was carried out legally, which is a potent reminder of the need to subject legislative moves to an ethical scrutiny.

This article was published in the March 2017 issue of The Bulletin.