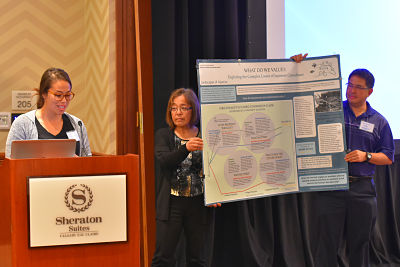 The National Association of Japanese Canadians Annual General Meeting took place in September in Calgary, Alberta. The NAJC and host organization, the Calgary Japanese Community Association must be commended for a very smoothly run program with excellent content. Delegates were offered sessions in the Heritage, Business Network, Human Rights and Young Leaders streams all led by qualified and interesting facilitators, providing a wonderful opportunity to learn, share and network.

The Saturday night Commemorative Banquet honouring the 100th anniversary of the Issei Volunteers in WWI was an epic event, with a detailed historical background by David Mitsui followed by stories from descendants of the WWI veterans, Laura Sugimoto and Tim Tamashiro. Author Kaye Kishibe also spoke about his research and stories from his 2007 book, Battlefield at Last.  David is the grandson of Masumi Mitsui, one of the veterans being acknowledged and honoured that evening. He is also the incoming president of the NAJC.

Project Manager, Michael Abe gave a short overview of the project and its purpose, and again reinforcing the offer made at last year’s AGM in Victoria that the project is committed to facilitating presentations and workshops for NAJC chapters and JC communities to help further their engagement in Landscapes. These could include, workshops on using oral histories to record and preserve family histories, using archival data to research and learn about the history of families and communities, presentations on legal documents surrounding the internment and dispossession or community mapping workshops to help evoke stories and memories of life before and during internment.

Vivian Ryngnestad, Community Council Chair, gave a motivating and heartfelt message from the community council and the energy that has formed between them and the project. They have developed a very good relationship and it continues to build strength as the project progresses.

The keynote belonged to Nicole Yakashiro, recipient of the 2016 NAJC/Landscapes of Injustice Hide Hyodo-Shimizu Research Scholarship who completed a summer of research in the Government Records research cluster. She worked at the Nikkei National Museum under the direction of Project Director and cluster chair, Jordan Stanger-Ross. Nicole reflected on her background, growing up in the Fraser Valley and what his project meant to her on a personal level, particularly the opportunity to meet and interact with other JC Young Leaders in the Vancouver area.

Her presentation, based on research of the Bird Commission claim of Vancouver Island lumber baron Eikichi Kagetsu, held the attention of the audience as she explored the concept of value in the forced sale of Kagetsu’s logging empire. The complexities of valuation were illustrated quite dramatically when comparing the marked differences between the agent valuation, appraised valuation and the owner valuation of Kagetsu himself. Nicole’s research is reflective of the project and asks the question, “How can we best engage our multiple ways of valuing property and place to maintain a just society that honours this diversity?”

Thank you to the NAJC for your continued support of Landscapes of Injustice and looking forward to the 2017 AGM in Ottawa during Canada’s sesquicentennial and the 75th anniversary of the uprooting and internment of Japanese Canadians. – Michael Abe, Project Manager