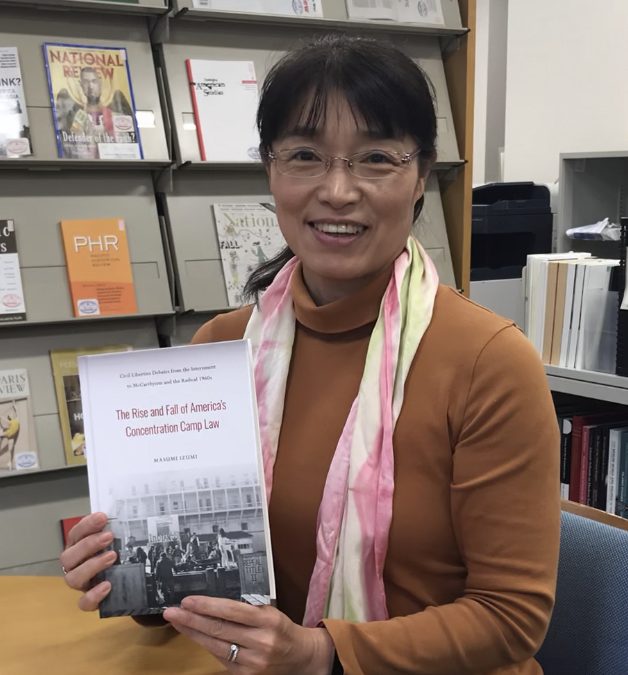 Here is the link to a recording of the presentation.

We invite you to join us for an online presentation of the Midge Ayukawa Commemorative Lecture with guests, Dr. Masumi Izumi, Doshisha University, Kyoto, Japan and Dr. Jordan Stanger-Ross, University of Victoria, British Columbia, Canada.

Masumi will give a short synopsis of her new book, The Rise and Fall of America’s Concentration Camp Law: Civil Liberties Debates from the Internment to McCarthyism and the Radical 1960s and Jordan will introduce the book, Landscapes of Injustice: A New Perspective on the Internment and Dispossession of Japanese Canadians which he was editor. They will then comment on and discuss how some of the material in the other’s book might contribute to their own research and field questions from the audience. 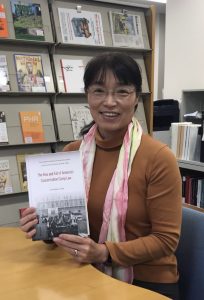 The Rise and Fall of America’s Concentration Camp Law: Civil Liberties Debates from the Internment to McCarthyism and the Radical 1960s

The Emergency Detention Act, Title II of the Internal Security Act of 1950, is the only law in American history to legalize preventive detention. It restricted the freedom of a certain individual or a group of individuals based on actions that may be taken that would threaten the security of a nation or of a particular area. Yet the Act was never enforced before it was repealed in 1971.

Masumi Izumi links the Emergency Detention Act with Japanese American wartime incarceration in her cogent study, The Rise and Fall of America’s Concentration Camp Law. She dissects the entangled discourses of race, national security, and civil liberties between 1941 and 1971 by examining how this historical precedent generated “the concentration camp law” and expanded a ubiquitous regime of surveillance in McCarthyist America.

Izumi also shows how political radicalism grew as a result of these laws. Japanese Americas were instrumental in forming grassroots social movements that worked to repeal Title II. The Rise and Fall of America’s Concentration Camp Law is a timely study in this age of insecurity where issues of immigration, race, and exclusion persist.

A 30 minute video presentation from Tadaima! A Community Virtual Pilgrimage by Masumi provides some background on the book. https://vimeo.com/443242511

“Izumi presents a compelling argument, claiming that US lawmakers, gripped by the fear of a communist (rather than Japanese) incursion, relied on the legal precedents created by the internment to institute America’s only preventive detention law—one aimed at potentially subversive individuals or groups…. The frequent inclusion of excerpts and illustrations from contemporary sources will help make the text more accessible for some readers…. (T)his is a welcome addition to both American and legal history. Summing Up: Highly recommended.”
— Choice

“The Rise and Fall of America’s Concentration Camp Law is a significant addition to the literature in American history and law. Centering on the 1950 Emergency Detention Act, which authorized the president and the attorney general to institute preventive detention of U.S. citizens, this book’s notable contribution is in demonstrating that the act’s provisions were largely inspired by the official confinement of Japanese Americans during World War II, which formed a conscious precedent. Based on extensive research in government archives, this study’s findings are compelling.”—Greg Robinson, Professor of History at the University of Quebec at Montreal and author of The Great Unknown: Japanese American Sketches 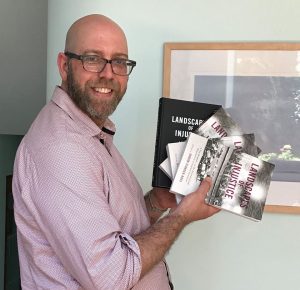 In 1942, the Canadian government forced more than 21,000 Japanese Canadians from their homes in British Columbia. They were told to bring only one suitcase each and officials vowed to protect the rest. Instead, Japanese Canadians were dispossessed, all their belongings either stolen or sold.

The definitive statement of a major national research partnership, Landscapes of Injustice reinterprets the internment of Japanese Canadians by focusing on the deliberate and permanent destruction of home through the act of dispossession. All forms of property were taken. Families lost heirlooms and everyday possessions. They lost decades of investment and labour. They lost opportunities, neighbourhoods, and communities; they lost retirements, livelihoods, and educations. When Japanese Canadians were finally released from internment in 1949, they had no homes to return to. Asking why and how these events came to pass and charting Japanese Canadians’ diverse responses, this book details the implications and legacies of injustice perpetrated under the cover of national security.

“Uprooted, interned, dispossessed, dispersed, and exiled. This volume brilliantly tracks the appalling excesses of Canadian white supremacists and the resilient responses of Japanese Canadians. As the authors of this remarkable book conclude, we all walk atop the sediment of landscapes of injustice.” Constance Backhouse, University of Ottawa

Dr. Masumi Izumi, Ph.D (American Studies) is a professor in the department of global and regional studies at Doshisha University in Kyoto, Japan, where she teaches North American studies. Izumi researches Japanese American and Japanese Canadian wartime experiences as well as their post-internment communities and trans-Pacific migration and has written numerous articles on these topics in English and Japanese. She authored The Rise and Fall of America’s Concentration Camp Law: Civil Liberties Debates from the Internment to McCarthyism and the Radical 1960s and also contributed an article on a Japanese Canadian baseball team to an edited volume, The Subject(s) of Human Rights: Crises, Violations, and Asian/American Critique; both were published by Temple University Press in 2019.

Dr. Jordan Stanger-Ross, is an associate professor of history at the University of Victoria and the project director for the Landscapes of Injustice research project. He is co-editor of Witness to Loss: Race, Culpability, and Memory in the Dispossession of Japanese Canadians (McGill Queens University Press, 2017), with Pamela Sugiman, and is the editor of Landscapes of Injustice: A New Perspective on the Internment and Dispossession of Japanese Canadians.

The Ayukawa Commemorative Fund was established in 2013 by the UVic Department of History in honour of the life and work of Dr. Michiko ‘Midge’ Ayukawa (1930-2013) who dedicated her later years to the study and telling of Japanese Canadian and women’s history.

Raised in the Strathcona area of Vancouver, Midge was uprooted and interned at Lemon Creek in 1942. The family relocated to Hamilton where Midge went on to a distinguished science career and raised a family. Returning to BC in 1980, Midge began a third career, earning a history MA and PhD at UVic and publishing her landmark article “Good Wives and Wise Mothers: Japanese Picture Brides in Early Twentieth Century British Columbia” (BC Studies). Her Ph.D. dissertation (History, UVIC) was published as Hiroshima Immigrants in Canada, 1891-1941 (UBC Press, 2008).

Presented by the Ayukawa Commemorative Fund in association with the University of Victoria’s Department of History, Centre for Asia-Pacific Initiatives and Landscapes of Injustice.