Public Talk Re Persons of Japanese Race Exile: The Expulsion of Japanese Canadians, 1946 -with recording link 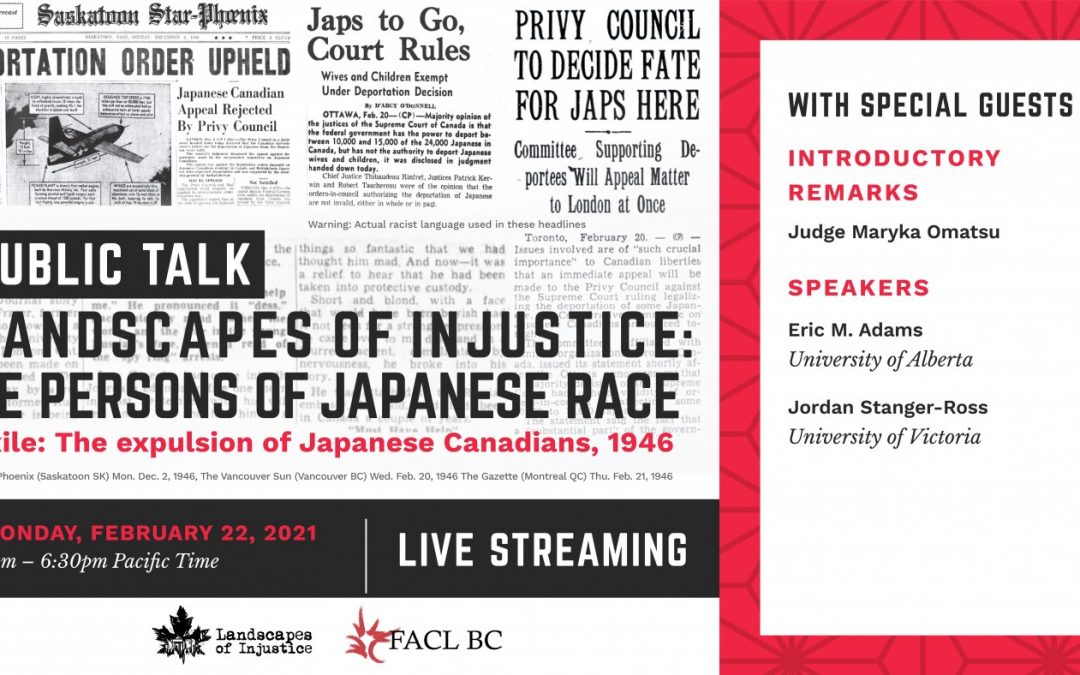 Landscapes of Injustice: Re Persons of Japanese Race

Public talk
Free and open to the public

On February 20, 1946, the Supreme Court of Canada upheld three Orders in Council authorizing the mass exile of Japanese Canadians in the Re Persons of the Japanese Race decision. This year marks the 75th anniversary of that judgment and of the subsequent decision of the Judicial Committee of the Privy Council to uphold the SCC decision on appeal. Dr. Jordan Stanger-Ross (Professor of History, University of Victoria) will cover the historical background and policy origins while Dr. Eric M. Adams will speak about the decision itself. Drs. Adams and Stanger-Ross are working together on a book on the Japanese Canadian exile based on the research of the Landscapes of Injustice collective.

The Co-operative Committee on Japanese Canadians and another v The Attorney-General of Canada and another, [1947] A.C. 87

Eric M. Adams is Vice Dean and Professor of Law at the Faculty of Law. The recipient of several awards for his research and teaching, Eric publishes widely in the fields of constitutional law, legal history, legal education, employment law, and human rights. He provides occasional legal advice on constitutional matters and frequent media commentary on a variety of legal topics.

This event is proudly supported by Carfra Lawton LLP and Crease Harman LLP. We thank you for your support!