Update on the Esquimalt Tea House Building in Gorge Park 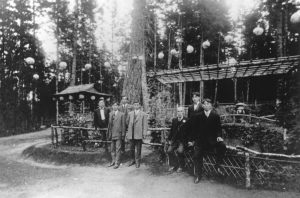 The Victoria Nikkei Cultural Society has been working with the community and Municipality of Esquimalt to create a legacy structure in Gorge Park, the site of Canada’s first Japanese Garden that was created in 1907 for the Takata Japanese Tea House and Gardens. This popular attraction was a huge tourist destination for over 30 years, until the forced uprooting and relocation of Japanese Canadians in 1942 left no trace of its former glory.

With the acquisition of funding for waterfront capital projects from the McLoughlin Amenity Funds, Esquimalt put out a call to the public for project proposals about 2 years ago. The VNCS proposal placed highly in two rounds of voting by the public and was one of several themed projects to move forward.  The public was again invited to vote on two preliminary concept designs presented at an open house in September 2019 and the results were presented in October with the multi-purpose building with Japanese design elements being the overwhelming popular choice. This building was approved in November using the lion’s share of the McLoughlin Amenity Funds. The budget also includes an expansion to the current Japanese Garden.

So the campaign to have a structure to commemorate the Takata Tea Garden appears to have been successful.  It has been almost 2 years since Esquimalt resident Dan Armstrong brought this opportunity to the attention of the VNCS. Along the way many people have been involved in this campaign and have contributed to its success. Jordan Stanger-Ross and his associates at the Landscapes of Injustice project were a key ally in their fight.  The involvement of Lisa and Dillon Takata, great grandson of Kensuke Takata, one of the original owners, was also critical. But the work is not over. The VNCS will continue to advocate for the completion of an appropriate commemorative building and provide input to the Japanese design elements of the building.

On February 19, 2020 the VNCS Tea House Committee (Tsugio Kurushima, Lisa and Dillon Takata and Jordan Stanger-Ross) met with Scott Hartman, Director of Parks and Recreation for Esquimalt to discuss the status of the multi-purpose Building for the Gorge Park.  The architects who have been engaged to do the detailed design and the costing gave them a presentation of the building design, the floor plan and the exterior plans.  The building has come a long way from the original rendering.  The exterior of the building looks much more Japanese and they have incorporated some landscaping features such as a reflecting pond and a grove of cherry trees which adds to the Japanese ambience.  Below is a graphic of the new building design. 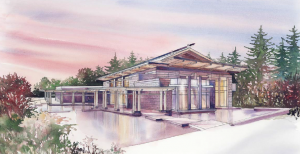 They also delivered to Scott a document describing the usage of the building for the Japanese Canadian community.  In that document they also proposed a consultative committee to work with Esquimalt on programming.  Although Scott said it would be too difficult and too lengthy of a process to establish a formal committee he did agreed to consult with the VNCS on the usage of the building as it pertains to the Nikkei community.

The focus for Esquimalt at this point is on getting the design approved and the detailed costing completed.  They hope to have Council approval by April and go to tendering for construction by late April.  Construction would then start in late May or early Jun.  It would take 10-12 months to construct with the new building being operational in mid-2021.

From files by Tsugio Kurushima, President of the Victoria Nikkei Cultural Society. More information on this campaign can be found at www.vncs.ca