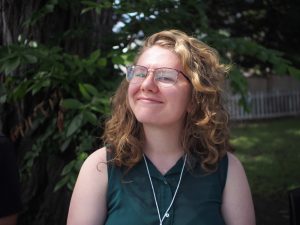 As an undergraduate student, a constant battle exists between imposter-syndrome and believing in myself. Pursuing a double major in honours history and writing, with a minor in journalism and publishing, it’s hard to see how my disciplines can blend. So when the opportunity to work on Landscapes of Injustice arose last fall, despite my fears, I challenged myself to apply, trusting my capabilities to work hard and learn. Looking back almost a full year later, I’m overwhelmingly thankful I did.

I am the recipient of the Frank H. Hori Research Fellowship. For the past ten months I have worked with the oral history collection, contacting narrators and finalizing transcripts that will be made available to the public on our upcoming database. Last November, I would never have anticipated how this position would change my final two years at the University of Victoria.

During the summer, I took time away from my research position to enroll in the Seminar in Canadian History: Canada’s Internment Era – a Field School. It was an amazing two-week course, and one of the rare opportunities to take my discipline outside the classroom. For the first week we participated in the Nikkei Internment Bus Tour, sharing the landscape with those who had lived through interment and/or their descendants. Touring the Kootenays with both my peers and elders is one of the most enriching learning experiences I have had during my academic career, one filled with fruitful conversations and shared learning that could not have happened in a regular course. And not only did the field course provide me with learning opportunities, but I also had the pleasure of meeting interviewees in person. It’s an exciting moment to have a conversation with someone you’ve listened to intently, recording their words, preserving their life story as a historical record. 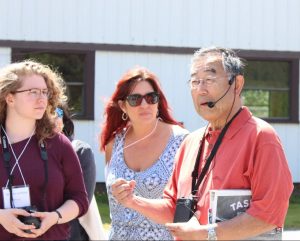 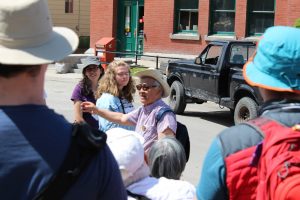 At the end of those two weeks, with a great team of peers, we were able to output a choose-your-own adventure narrative for our group project, one that will be used in teacher resources to educate youth about the choices Japanese Canadians made during the internment era. My participation on the narrative was heavily influenced by my work with the oral history collection, and would not have been possible without it.

I am very proud of our hard work, and beyond thankful for the learning opportunity the field course provided. It is my understanding that not only did the Frank H. Hori Charitable Foundation provide the funds for my fellowship, but also contributed funds to help subsidize a portion of the costs of the bus tour for students. I, as well as others, am incredibly grateful for their generosity and willingness to help students achieve success. It is an overwhelming feeling when you receive financial support, one you don’t forget during your degree.

I’ve gained so much knowledge from the LOI community: researchers, coworkers, supervisors, project participants, and the Japanese-Canadian community at large. Working with them has been the most rewarding aspect of my job. It is an amazing position, one where I blend my journalism skills with history, as well as contribute to a community-based project that goes above and beyond what I thought historical study could accomplish. Because of my fellowship, I am now working with Dr. Stanger-Ross for my honours thesis on Japanese-Canadian history, and I have a newfound confidence in my ability to produce a thoughtful, well-researched paper. I have learned so much, and will continue to learn.

I cannot overstate my sincere gratitude to the Frank H. Hori Charitable Foundation for providing this fellowship, and all the opportunities it continues to create for me.

Frank Hiroshi Hori (February 2, 1927 – April 15, 2011) was born in Vancouver, British Columbia, to Haruye and Zenya Hori, originally from Shiga-ken, Japan. They were merchants of Japanese goods on Powell Street, at the centre of the city’s Nikkei (Japanese) community. Frank and his seven siblings grew up in a home filled with love, warmth, and the camaraderie of family and many Japanese friends.

​     During the war, the Hori family was sent to the Slocan Internment Camp (Bay Farm) for a two-year period, where Frank attended a makeshift school. Eventually the family relocated to Regina, where he attended Regina College before moving to Montreal. He attended McGill University from 1951 to 1954, studying business and accounting.

Frank always remembered the funding support provided by his siblings towards his post-secondary studies.

Frank launched his 30-year career with Premium Forest Products, a Toronto-based door manufacturer, which was renamed Premdor Inc. when Frank and partners purchased the company. In 1986, Frank was instrumental in leading the company to public ownership with eventual international opportunities. He retired as Executive Vice-President and CFO of Premdor Inc. and as Vice-Chairman and Director of its subsidiary, Masonite International.

Frank was a highly proficient individual with a stellar acumen for business.

During his retirement, Frank acquired various real estate properties and became a world traveller and a philanthropist with a deep passion for his cultural roots and heritage.
In 1999, Frank established The Frank H. Hori Charitable Foundation to promote charitable endeavours in general but mainly those aligned with his philanthropic ideals for Japanese culture: a caring society; post-secondary learning; and the honouring of meritorious Canadians of Japanese ancestry for their contributions to Canada.