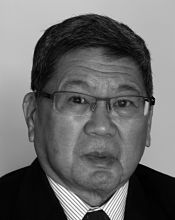 Arthur Miki has had a distinguished career as an educator and community activist. He began his career as an elementary school teacher and later served as principal for 18 years. He is president of the Asian Heritage Society of Manitoba that organizes Asian Heritage Month activities and also president of the Japanese Cultural Association of Manitoba. Arthur lectures to school and university students on the Japanese experience in Canada and his involvement with the Japanese Canadian redress movement in the 1980s. He has given many speeches on this issue to varying groups of educator and to community, national and international events. Mr. Miki was president of the National Association of Japanese Canadians when he led the negotiations to achieve a just redress settlement for Japanese Canadians interned during the Second World War. In 1991 he received this country’s highest recognition, the Order of Canada. On July 12, 2012 he received the Order of Manitoba. Mr. Miki was Citizenship Judge for Manitoba and Saskatchewan from 1998 to 2008. He is currently a part time lecturer at the University of Winnipeg, Faculty of Education. He is also author of The Japanese Canadian Redress Legacy; A Community Revised (2003) and co-author of Shaku of Wondrous Grace; Through the Garden of Yoshimaru Abe (2007).