In 2021, Landscapes of Injustice (LOI) will launch an online database of materials collected during the research phase of the project.  Now, as LOI moves into its knowledge mobilization phase, the newly formed Archival Website Cluster is working hard to prepare the information for public use.  The database will give researchers access to thousands of records from multiple archives through one website. 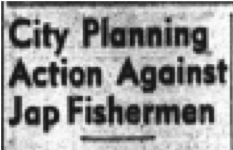 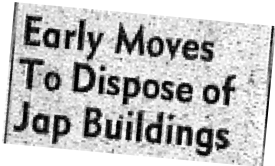 These newspaper headlines represent a small selection of newspaper articles we hold in our collection.  These newspapers will be included in the launch of our archival website in 2021. (Images courtesy of the Legislative Library, the University of Victoria, and the BC Archives).

Since the research phase began in 2014, LOI’s Research Collective members located records related to Japanese-Canadian dispossession in over 20 archives and a few libraries in Canada and abroad.  They include the Nikkei National Museum, Library and Archives Canada, University of British Columbia Archives, the Cumberland Museum and Archives, and the University of Oxford located in the United Kingdom.  With the help of the host archives’ staff, the LOI team discovered thousands of records.  They made digital copies of the records and documented contextual information, such as dates of creation, individuals involved, and locations.

The records include government reports, letters protesting the dispossession of Japanese-Canadian property, correspondence showing the varied opinions of bystanders regarding the treatment of Japanese Canadians, phone books, and newspaper articles.  From this collection, scholars and the public can gain insights into many different viewpoints and actions of Canadians as well as a greater appreciation for social injustices in Canadian history. 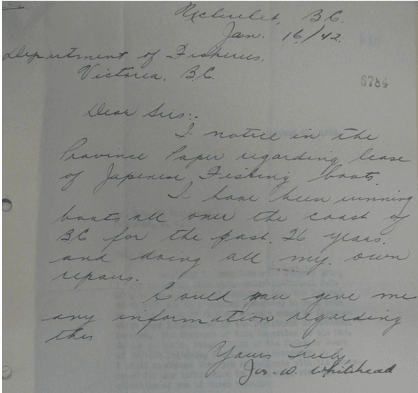 This handwritten letter was written by a Canadian regarding the sale and purchase of a confiscated Japanese Canadian fishing vessel. (BC Archives, GR-0435, Box 87, File 834. Image has been modified by cropping).

Currently, the information gathered by the team is stored in LOI’s internal database.  The Archival Website Cluster is building and populating a new database to make this data publicly available, and to encourage future scholarly and community research.  Researchers will have access to materials that were previously unavailable online and be able to access them through one website.  The database will allow researchers, for example, to browse through records created by one government committee or to search all records for a family name.

Later in the project, the database will grow to include materials created by LOI, particularly oral histories. But for now, the priority of the cluster is to carefully edit and add to the contextual information about the records in preparation for batch migration into Access to Memory (the database’s public-facing interface).  The contextual information will facilitate keyword searches and help researchers understand how records relate to each other and what led to the records’ creation. 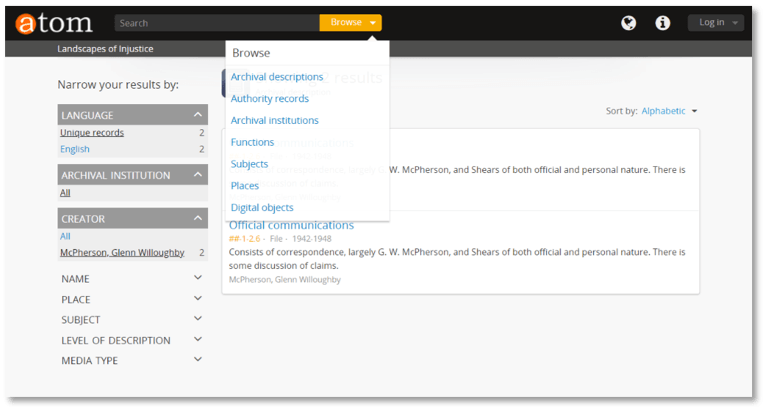 Access to Memory (AtoM): The above image shows different ways researchers will be able to search or browse through records using AtoM, the public-facing interface of the database.  AtoM is used by many archives like Simon Fraser University and BC Archives.

One of our largest groups of records from our research is the “Bird Commission” which follows many loss or property claims made by Japanese Canadians during post-war years.  Victims of the forced sale of their property made these claims in an effort to achieve justice for their economic losses and resulting hardships suffered. Much of the Japanese-Canadian property was sold to opportunistic buyers at below-market value.  Justice Henry Bird, the presiding judge in these cases, rewarded many Japanese Canadians with small sums of compensation in response to cases of dispossession. The legacy of these awards is still discussed today. The LOI database will make these records public in an effort to further elucidate the details of this important procedure.

Another large assortment of records we hold is a collection of newspaper articles published by a variety of British Columbian newspapers such as the Vancouver Sun, the Province, and The New Canadian.  This newspaper collection ranges from articles published between 1912 to 1980.  Therefore, we can gain an insight into events leading up to the forced uprooting of Japanese Canadian from the coast and their subsequent incarceration, as well as the government sanctioned sale of Japanese-Canadian property, the Bird Commission, and the 1980s Redress Movement.  Newspaper articles provide a window into the tenor of the times as well as differing viewpoints taken by various Canadian officials and the public. While they were previously available to the public, the LOI database will make them easier to access in a single location with various search options.

By looking at these few examples of records we hold in this rich collection of archival material researchers can gain a broader understanding of the injustices faced by the Japanese Canadian community during this period of history. This archival website will give people the power to learn more about the dispossession and internment of Japanese Canadians and help individuals learn about their family history.

LOI’s Archival Website Cluster is made up of archivists and programmers.  The cluster is headed by Lisa Uyeda, the Collections Manager of the Nikkei National Museum, and Stewart Arneil, a programmer consultant with the University of Victoria’s Humanities Computing and Media Centre. 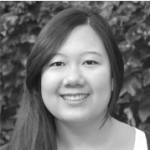 Kara is working with Lisa at the Nikkei National Museum to ensure that the contextual information follows the relevant archival guidelines.  She recently completed MAs in Archives and Records Management and Museum Studies at the University of Toronto.  She is the 2018 recipient of the NAJC-LOI Hide Hyodo-Shimizu Research Scholarship. 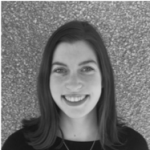 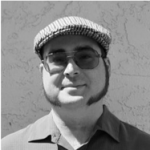 Gord has been an RA with the LOI Research Collective since 2016. For the first two years he worked as an archival researcher at the BC Archives and now joins the Archival Cluster working at the HCMC developing programming for the migration of data-sets and collected material.